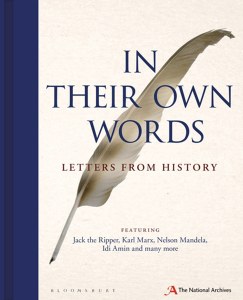 In Their Own Words: Volume 1

In Their Own Words Volume 1 : Letters From History

A stunning collection of letters taken from The National Archives' own collection.

The way we communicate has changed. Today, many of our interactions are digital, but until recently writing letters was the norm. Drawing from over 100 miles of records held at the UK's official government archive, The National Archives at Kew, this collection of letters, postcards and telegraphs will shine a spotlight on a range of significant historical moments and occurrences, recapturing a lost world in which correspondence was king.

The book includes letters from: Karl Marx, requesting UK citizenship, an anonymous writer purporting to be Jack the Ripper, Josef Kramer, the commandant of Bergen Belsen, from Winston Churchill to President Roosevelt requesting US support against Hitler, Clement Atlee to Harry S Truman following Hiroshima, the spies Burgess and Maclean, as well as the 'real Charlotte Gray' spy, Christine Granville, amongst others. Topics covered include: the Monteagle letter that warned about the Gunpowder plot, letters from the Wright brothers trying to get the War Office to fund their aeronautical research, a despatch on the murder of Archduke Franz Ferdinand, Christine Keeler's Russian/British love triangle that begat the Profumo affair, US disapproval of British trade with Cuba, a letter reporting on the first day of the trial of Nelson Mandela, the anonymous letter that framed the Krays. ?The book features approximately 80 letters, each with a 600-word essay, and a 3000 word introduction.

There are around 140 images in the book: 80 of the letters themselves, and a further 60 supplementary images.

In Their Own Words:
Mix and match with these items to avail of discounts: