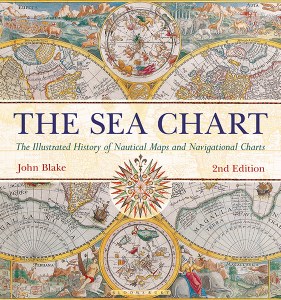 To sail the oceans needed skill as well as courage and experience, and the sea chart with, where appropriate, the coastal view, was the tool by which ships of trade, transport or conquest navigated their course. This book looks at the history and development of the chart and the related nautical map, in both scientific and aesthetic terms, as a means of safe and accurate seaborne navigation. The Italian merchant-venturers of the early thirteenth century developed the earliest 'portulan' pilot charts of the Mediterranean.

The subsequent speed of exploration by European seafarers, encompassing the New World, the extraordinary voyages around the Cape of Good Hope and the opening up of the trade to the East, India and the Spice Islands were both a result of the development of the sea chart and additionally as an aid to that development. By the eighteenth century the discovery and charting of the coasts and oceans of the globe had become a strategic naval and commercial requirement. Such involvements led to Cook's voyages in the Pacific, the search for the Northwest Passage and races to the Arctic and Antarctic.

The volume is arranged along chronological and then geographical lines. Each of the ten chapters is split into two distinct halves examining the history of the charting of a particular region and the context under which such charting took place following which specific navigational charts and views together with other relevant illustrations are presented. Key figures or milestones in the history of charting are then presented in stand-alone story box features.

This new edition features around 40 new charts and accompanying text.

Map Of A Nation : The Biography of the Ordnance Survey

Maps Of The United Kingdom

The Writer's Map: An Atlas Of Imaginary Lands

Theatre Of The World: The Maps That Made History