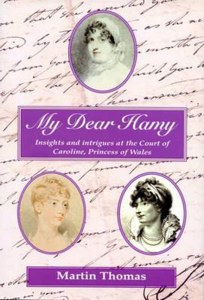 My Dear Hamy: Insights and Intrigues at the Court of Caroline Princess of Wales

This book is the story of the lives of three feisty women - Caroline and Charlotte, of the blood royal, and Anne herself, the common sensed commoner. The world was rocking on its axis as Napoleon led the French into war with Britain and Europe. But as her husband progressed from mistress to mistress and squandered a fortune on gambling and excess, Caroline’s household too rocked with hushed up scandals and indiscretions,.

In the middle of it all was the growing girl, Charlotte, a pawn in her parents’ battles. Miss Hayman, or ‘Hamy’ as the little Princess called her, was a concerned spectator, using all her wit, her guile and her political connections to keep the peace with the Prince of Wales and to foster affection between mother and daughter. There were times when Charlotte wanted to run away and find refuge in her Hamy's comfortable home in Wales. As a rebellious teenager, her father wanted to treat her as a child, her mother to encourage her in dangerous liaisons.

Caroline herself deserted by her husband, risked all for love and companionship. She paid the penalty. At his coronation as King George IV, the door of Westminster Abbey was slammed in her face and she was barred from her place as his Queen.

Anne Hayman outlived them all. She was a prolific letter writer and left the inside story to us down the generations. Most of her letters have remained unobserved in major libraries in Britain and abroad and have formed the basis of this dramatic but true history of Regency life - social, political and intimately personal.

English Society in the 18th Century

In Bed with the Georgians