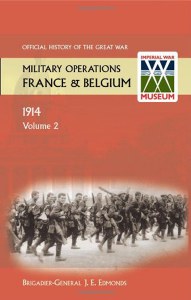 New Edition with all Maps Reproduced in Full Colour. The Official History of the Great War was the grandest official history ever produced in Britain. Its purpose was to provide "within reasonable compass an authoritative account, suitable for general readers and for students at military schools." Due to the number of full-colour maps bound in each volume previous attempts to reprint this valuable reference ether floundered, or were produced with the maps in monochrome. At last the acclaimed work of the official cartographers who had ninety thousand maps at their command can be examined as they intended in full colour.

This is part of a multivolume work. This is one of two volumes delaing with 1914.

This volume covers operations at Antwerp, the arrival of the BEF in Flanders, La Bassée, Armentières, Messines and Ypres October-November 1914. There is an introductory chapter which describes the expansion of the army; control of War Policy; the munitions situation; housing, equipment and supply of the Army and New Armies and provides a summary of expeditions against the German colonies in 1914.