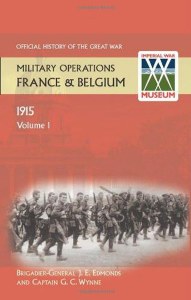 New Edition with all Maps Reproduced in Full Colour. The Official History of the Great War was the grandest official history ever produced in Britain. Its purpose was to provide "within reasonable compass an authoritative account, suitable for general readers and for students at military schools." Due to the number of full-colour maps bound in each volume previous attempts to reprint this valuable reference ether floundered, or were produced with the maps in monochrome. At last the acclaimed work of the official cartographers who had ninety thousand maps at their command can be examined as they intended in full colour.

This is part of a multivolume work and is one of two volumes covering 1915.

This volume covers the first five months of 1915, a year that brought little comfort to the BEF. In this account we read of the affairs of Cuinchy, Givenchy and St Eloi, costly actions with little or no result. The major operations were the Battle of Neuve Chapelle, and the battles of Ypres (Second Ypres) Gravenstafel Ridge, St Julien (during which gas was used for the first time on the Western Front), Frezenberg Ridge and Bellewaarde Ridge. The two other major British attacks in May, Aubers Ridge and Festubert are covered in the next volume. There are 36 appendices, giving order of battle details and various Operation Orders and samples of correspondence.