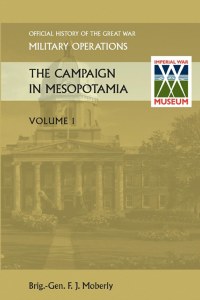 Official History of The Campaign in Mesopotamia Volume 1

THE CAMPAIGN IN MESOPOTAMIA VOL I. OFFICIAL HISTORY OF THE GREAT WAR OTHER THEATRES:

The first of four volumes covering the campaign in ‘Mesop’ (today’s Iraq) that was fought mainly by Indian Army troops – only one British division was there, the 13th (Western) which arrived from Gallipoli in February 1916. This volume opens with background on the geography of the country, the pre-war political scene, the Turks, the Indian Army and the inception of the operations. The history of the campaign opens with the landing of Force ‘D’ in Mesopotamia in November 1914, the occupation of Basra and capture of Qurna. It covers the defeat of the Turkish counter-offensive, the capture of Amara in June 1915 and on to the Battle of Kut in September, concluding with the situation at the beginning of October 1915.

Official History of the Campaign in Mesopotamia Volume II