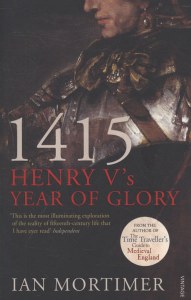 Henry V is regarded as the great English hero. Lionised in his own day for his victory at Agincourt, his piety and his rigorous application of justice, he was elevated by Shakespeare into a champion of English nationalism for all future generations. But what was he really like? Does he deserve to be thought of as 'the greatest man who ever ruled England?'.

In this groundbreaking and ambitious book, Ian Mortimer portrays Henry in the pivotal year of his reign. Recording the dramatic events of 1415 on a day-by-day basis, he offers the fullest, most precise and least romanticised view we have of Henry and what he did. In addition, the king's story is told against the background of other important developments in Europe, in particular the struggle for power within the Catholic Church and official attempts to eradicate any deviant religious beliefs.

In so doing, the reader encounters unexpected and eye-opening explanations for why Henry tried to unify the kingdoms of England and France - and why he was prepared to burn men alive as heretics. The result is not only a fascinating reappraisal of Henry; it brings to the fore many unpalatable truths which biographers and military historians have largely ignored. While Henry retains the essential qualities of his greatness, his legend is stripped of its Shakespearean rhetoric and compassion.

At the centre of the book is the campaign which culminated in the battle of Agincourt: a slaughter ground designed not to advance England's interests directly but to demonstrate God's approval of Henry's royal authority on both sides of the Channel. 1415 was a year of religious persecution, personal suffering and one horrendous battle. This is the story of that year, as seen over the shoulder of its most cold-hearted, most ambitious and most celebrated hero.

Ian Mortimer is a participant in The National Archives Writer of the Month programme.