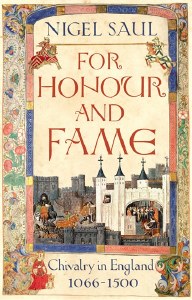 The world of medieval chivalry is at once glamorous and violent, alluring yet alien. Our popular views of the period are largely inherited from the nineteenth-century romantics, for whom chivalry evoked images of knights in shining armour, competing for the attention of fair ladies - with pennons and streamers fluttering from castle battlements. But what is the reality? Were the rituals and romance of chivalry designed to provide an escape from the brutal facts of almost continuous warfare? Or did they instead help regulate the conduct of war and moderate its violent excesses? Nigel Saul charts the introduction of chivalry by the Normans, the rise of the knightly class as a social elite, the fusion of chivalry with kingship in the fourteenth century and the influence of chivalry on literature, religion and architecture.

He shows us a world of kings and barons, castles and cathedrals - a world shaped by Richard the Lionheart and the Crusades, by Magna Carta and the rule of law, by battles like Bannockburn and Crecy, by the Black Death and by tournaments, round tables and the cult of Arthurianism.

How To Plan A Crusade