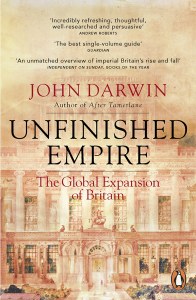 This is a both controversial and comprehensive historical analysis of how the British Empire worked, from Wolfson Prize-winning author and historian John Darwin. The British Empire shaped the world in countless ways: repopulating continents, carving out nations, imposing its own language, technology and values. For perhaps two centuries its expansion and final collapse were the single largest determinant of historical events, and it remains surrounded by myth, misconception and controversy today.

John Darwin's provocative and richly enjoyable book shows how diverse, contradictory and in many ways chaotic the British Empire really was, controlled by interests that were often at loggerheads, and as much driven on by others' weaknesses as by its own strength. Reviews: "A breadth of perspective few other imperial historians can boast. The British Empire really does look different in the light of it...Breadth of vision, fizzing ideas and a brilliant style as well as superb scholarship...It deserves to supplant every other book on this topic ...the one we've been waiting for".

(Bernard Porter, History Today). "A brilliantly perceptive analysis of the forces and ideas that drove the creation of an extraordinary enterprise...Bringing together his huge erudition, scrupulous fairness and elegant prose, Mr Darwin has produced a wonderfully stimulating account". (Economist).

"Engrossing...What Darwin adds to this [subject] is a rare, wonderful capacity for comparison...Seeing the imperial experience in the round like this does gives us a clearer, more subtle appreciation of the range of power and violence at play. It raises the historical writing on empire to another level". (BBC History Magazine).

John Darwin won the Wolfson History Prize for his book "After Tamerlane: The Rise and Fall of Global Empires". In "Unfinished Empire" he examines the enormous influence of the British Empire. It has shaped the world in countless ways: repopulating continents, carving out modern nations, imposing its own language, technology and values. For perhaps two centuries its existence, expansion and final collapse were the single largest determinant of historical events. Now that it has gone, it seems to us baffling that such a strange entity should ever have existed. What was the dynamic that led to English-speakers standing on the shores of the Pacific, controlling the world's sea transport and creating a financial system that revolutionized the world's economies? John Darwin's provocative and richly enjoyable new book is an attempt to make us see a new how diverse, strange and in many ways chaotic the British Empire really was, controlled by a range of interests often at loggerheads with each other and as much driven on by others' weaknesses as by its own strength. By understanding the different phases of imperial conquest, the wildly different types of colonist (with soldiers and farmers, merchants and government officials often barely on speaking terms), and what made the Empire ultimately collapse in ruins, "Unfinished Empire" is a surprising, original and often critical account of an extraordinary phenomenon.