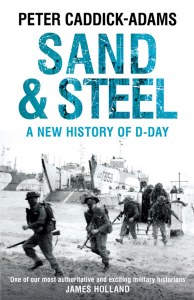 Sand And Steel : A New History of D-Day

The most comprehensive and authoritative history of D-Day ever published'Extraordinary' Andrew Roberts'Fascinating' Daily Mail'Magisterial' James Holland________________6 June 1944, 4 a.m. Hundreds of boats assemble off the coast of Normandy. By nightfall, thousands of the men they carry will be dead.

Through their sacrifice, the Allies will gain a foothold in Europe that will ultimately lead to the downfall of the Third Reich. This was D-Day, the most important day of the twentieth century. ________________In Sand and Steel, one of Britain's leading military historians draws on a decade of archival research and thousands of interviews to offer a panoramic new account of the Allied invasion of France.

Peter Caddick-Adams masterfully recreates what it was like to wade out onto the carnage of Omaha Beach, facing the machine-gun fire that wiped out whole battalions of troops. He delves into how the Allied generals came to choose Normandy in June 1944, and describes the extraordinary subterfuge that went into keeping the decision secret. And he recounts how the operation transformed the lives of Britons back home, transforming sleepy villages in the Home Counties into bustling military outposts.

His findings offer revelatory new insights into our understanding of D-Day. Sand and Steel is the only book to discuss the experiences of every major military force: not just the infantrymen on the beaches, but also the paratroopers, sailors and aircrew, resistance fighters in France, women on the Home Front, and even the German Wehrmacht. It offers the first full analysis of the year-long invasion preparations, revealing that more men died in training exercises than during the landing itself.

Above all, it pays tribute to soldiers of all nationalities, demonstrating that the often-overlooked UK and Canadian troops were just as crucial to victory as the American forces were. The result is an authoritative and compulsively readable exploration of the most important battle in history. It will be the definitive work on D-Day for years to come.

________________PRAISE FOR SAND AND STEEL'Whether you are a visitor to the Normandy battlefields, a general reader interested in the greatest amphibious assault in the history of warfare, or just someone who appreciates extremely well-written military history . . .

this truly extraordinary book is undoubtedly the one for you.' Andrew Roberts'Fascinating . . .

Reveals the full horror Allied troops suffered as they prepared to overwhelm the Nazis, examining the facts behind the historic assault.' Daily Mail'Following his excellent study of the Battle of the Bulge, Caddick-Adams does it again by explaining, as opposed to simply describing, the Allies' victory.' Jeremy Black'Peter Caddick-Adams is unquestionably one of the very finest historians of the Second World War . . .

His D-Day must surely go down as the definitive narrative of that pivotal moment in the history of the war.' James Holland