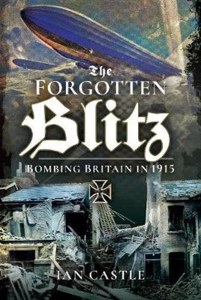 At the outbreak of the First World War, the United Kingdom had no aerial defence capability worthy of the name. When the war began Britain had just thirty guns to defend the entire country, with all but five of these considered of dubious value . So when raiding German aircraft finally appeared over Britain the response was negligible and totally ineffective.

Of Britain s fledgling air forces, the Royal Flying Corps had accompanied the British Expeditionary Force into Europe leaving the Royal Naval Air Service to defend the country as best it could. That task was not an easy one. Airships only appeared at night and for British pilots night-flying was in its infancy.

From the first raid in December 1914, aerial attacks gradually increased through 1915, culminating in highly damaging assaults on London in September and October. London, however, was not the only recipient of German bombs, with counties from Northumberland to Kent also experiencing the indiscriminate death and destruction found in this new theatre of war the Home Front. The British population was initially left exposed and largely undefended when the previously unimagined horror of bombs falling from the sky began, killing children in their beds and destroying homes.

The face of war had changed forever. Those raids on London in the autumn of 1915 finally forced the government to pursue a more effective defence against air attack. The German air campaign against the United Kingdom was the first sustained strategic aerial bombing campaign in history.

Yet it has become the forgotten Blitz. Those first bombing raids in 1915 claimed over 700 casualties. Relying heavily on first-hand accounts, Ian Castle tells their story, along with that of the raiders, and those who fought desperately to stop them in the opening year of Britain s forgotten Blitz.