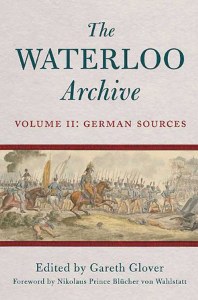 German troops formed the majority of Wellington’s forces present at the Battle of Waterloo including those of Nassau, Brunswick, Hanover and the King’s German Legion, and they have left a large number of first-hand accounts of their role in the battle.

The actions of the King's German Legion – an integral part of the British Army and partly officered by British soldiers – has been published in English, but to a limited degree: Herbert Siborne published letters written to his father; Ompteda and Wheatley have had their memoirs published; and History of the King’s German Legion included a small number of letters, including the oft-misquoted account of the defence of La Haye Sainte by Major Baring. This forms a tiny proportion of the German material available. Therefore it is not surprising that early British histories of the battle have largely sidelined the achievements of the German troops, and this has been regurgitated by most that have followed.

This situation did not change until the 1990s when Peter Hofschroer published his two-volume version of the campaign from the German perspective, which included snippets of German documents published in English for the first time. But even this proved not totally satisfactory, as it did not provide the whole document to allow full interpretation.

There is a great need to provide an English version of much of the original German source material to redress the imbalance; this volume is intended to remedy that situation by publishing sixty of these reports and letters fully translated into English for the first time, giving a clearer insight into the significant role these troops played.

Gareth Glover is a historian specialising in the Waterloo campaign and the Peninsular War. He left school at eighteen to join the Royal Navy as a Seaman Officer and completed his extensive training course at Dartmouth College. He has published articles in The Waterloo Journal and the Journal of the Royal Artillery, and a novel about Waterloo,Voices of Thunder.