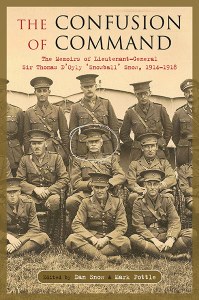 The Confusion of Command

'The enemy has got to be fought everywhere and hard...Everything is going very well indeed and no one minds the losses as long as we are moving.'The never-before-published papers of General Sir Thomas D'Oyly Snow provide a remarkable insight into the mindset of the Great War commanders. Despite being severely injured during the first Battle of the Marne - when his horse fell and rolled over him, cracking his pelvis - Snow served at some of the most important battles of the Western Front. His memoirs include the battle of Loos, the second battle of Ypres, the battles of Arras and Cambrai, the retreat from Mons and was responsible for the diversionary attack on Gommecourt on 1 July 1916, the first day of the Somme.This volume is comprised of vivid extracts from contemporary notes that only an eyewitness can offer coupled with frank postwar reflections that show the wisdom of hindsight and perspective, which brings an open awareness of military folly.D'Oyly Snow died in London, aged 82, on 30 August 1940.

This first edition of his letters and memoirs - published exactly 70 years after his death - has been introduced by his great grandson, the broadcaster and author Dan Snow.

In The Shadow of Bois Hugo

The Battle of Loos

The Irish Guards In The Great War : The First Battalion

The Irish Guards In The Great War : The Second Battalion