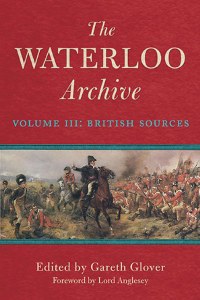 Volume iii of the remarkable Waterloo Archive series is brimming with personal letters and private journals written by participants in the campaign. By reading them we can share the innermost thoughts of those involved in the fighting, experience the agonies of those who lost someone, and see the pain and suffering inflicted on the thousands of wounded. The horrors of war are laid bare, but so also is the relief and happiness of survival.

This fascinating collection includes the poignant final letters from men who lost their lives that day; an account by a civilian visitor to the area six weeks after the battle end; and a very interesting letter by Second Lieutenant Richard Cocks Eyre of the 2nd Battalion 95th Rifles which makes a mockery of the myth that British troops did not openly plunder the local farmhouses before the battle for food and fuel to burn.

Each letter has something new to say; in fact, they prove beyond doubt that our ‘accepted’ history of the battle and campaign is wrong in many aspects, and a complete rewrite of certain episodes will eventually be required. This is an extremely important new book, expertly researched and edited, and essential reading for anyone interested in the Waterloo campaign.