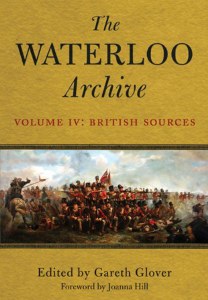 Volume IV contains letters and journals written largely in the immediate aftermath of the whirlwind campaign of 1815, both from the frontline troops and the support services, including medical reports and those of civilians. This volume includes:rnrnLetters by Sir Hussey Vivian and a much fuller version of the famous description by Frederick Ponsonby of his wounding and his subsequent adventures whilst lying on the battlefield during and after the battle. rnrnThe correspondence of officers in the infantry such as John Gardiner and George Barlow of the 69th Foot, and Daniel Mackinnon, famous for the defence of Hougoumont.rnrnRepresenting the cavalry, we have Captain John Whale, Lifeguards, who appears to have written the opening circumstantial narrative of 'A Near Observer' for Miss Eaton and George Packe of the 13th Light Dragoons, and those who were not on the field during the battle such as Arthur Kennedy of the 18th Hussars and Dixon Denham of the 54th Foot.

rnrnA series of letters to Sir Charles Bell from various surgeons attending to the wounded in Brussels give both a fascinating and appalling view of the consequences of war.rnrnA fascinating description from a witness of Napoleon onboard HMS Bellerophon at Plymouth including an original drawing of him before he sailed into exile on St Helena and a journal of a marine officer during the subsequent passage.