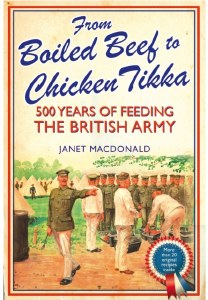 Janet Macdonald, author of the acclaimed Feeding Nelson's Navy, now turns her attention to food in the British Army over the past two centuries. Napoleon's remark 'an army marches on its stomach' has become an over-used cliche. It is a simple statement and undoubtedly true, but like many such simple statements, the actuality of what fills that stomach and how it is provided is far more complex.

The more you think about this subject, the more questions come to you: what did the British soldier eat: how was it cooked? Did it provide a proper diet or were there health problems from vitamin and other deficiencies? Did all ranks eat the same way? Who organised the whole thing? Here then, are the answers to those questions, with some insights into the personalities who made a difference - the unsung heroes of the British military machine.