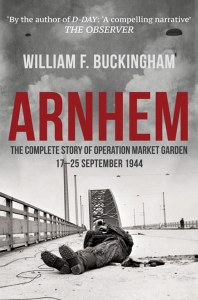 On 21 August 1944 German Army Group B was destroyed in Normandy and Allied troops began pressing east from the beachhead they had occupied since the D-Day landings. Within days British troops had liberated Brussels and reached the Dutch border. Encouraged by seeming total German collapse, the Allies gambled their overstretched resources on a high-risk strategy aimed at opening the way into Germany itself - crossing the Rhine.

On the afternoon of Sunday 17 September British tanks advanced into Holland in concert with 1,534 transport aircraft and 491 gliders. Their objective was a series of bridges across the Rhine, possession of which would allow the Allies to advance into Germany. In the event the operation was dogged by bad weather, flawed planning, tardiness and overconfidence, and ended with the Arnhem crossing still in German hands despite an epic nine-day battle that cost the British 1st Airborne Division over two-thirds of its men killed, wounded or captured.

Arnhem: The Complete Story combines analysis and new research by a leading authority on Operation MARKET GARDEN with the words of the men who were there, and provides the most comprehensive account of the battle to date, day by day, hour by desperate hour.