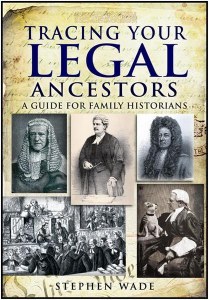 Tracing Your Legal Ancestors : A Guide for Family Historians

The law had as much influence on our ancestors as it does on us today, and it occupies an extraordinary range of individuals, from eminent judges and barristers to clerks and minor officials.Yet, despite burgeoning interest in all aspects of history and ancestry, lawyers and legal history have rarely been looked at from the point of view of a family historian. And this is main purpose of Stephen Wade’s accessible and authoritative introduction to the subject.

Assuming that the reader has little prior knowledge of how or where to look for such information, he traces the evolution of the law and the legal professions. He describes the parts played in the system by solicitors, officers of the High Court, registrars, recorders, town clerks, clerks of the peace, proctors, coroners, notaries, parliamentary agents, judges, barristers and magistrates. Also he identifies the various archives, records and books that the family researcher can turn to, and discusses other sources including the internet.

Stephen Wade’s concise account of legal history and research resources will be an invaluable guide for anyone who is studying the subject or seeking an ancestor who was associated with it.

Stephen Wade is a freelance writer specializing in the history of crime and the law in Britain and Ireland. He has written fourteen true crime and crime history books, including Tracing Your Police Ancestors and Tracing Your Criminal Ancestors. His history of detectives, Plain Clothes and Sleuths, was published in 2007 and he is currently completing a history of the City of London Police. He also teaches crime history at the University of Hull and, as a visiting lecturer, at Oxford. He has contributed to Family Tree Magazine, Ancestors and other periodicals.

Reviews
The British legal system is horribly complicated and confusing Quarter Sessions, Assizes, Magistrates, County Court, High Court to name but a few. There are lawyers, barristers, judges, recorders, registrars, clerks and coroners to name but a few more. Its hard enough to understand for those of us who have studied it for a while, so for the family history enthusiast finding that they have a lawyer in the family, it must be terrifying to know where to start. This book gives a good starting point.

I would go further however, and suggests that this is actually probably quite useful to read if you find that you have a criminal ancestor, as it gives a great description of the legal system. Therefore, you will be able to gain a much better understanding of the system that you ancestor will have gone through, and the people who would have defenced, prosectuted and sentenced them.

Never the less, this is a very useful book indeed. I must confess, it doesn’t sound like the most rivetting read, and its probably not something you would pick up purely for fun. But if you find thats one of your ancestors was a lawyer or judge or such like, this would be an ideal guide. As usual with the ‘Tracing your… Ancestors’ series there are plenty of useful resources listed, and particularly useful in this case a sizeable glossary of legal terms.