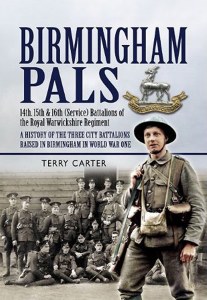 In the summer of 1914, our finest young men flocked to the colours in Northern towns and cities to answer Lord Kitchener’s ‘Call to Arms’ in a spontaneous burst of enthusiasm and patriotism. The Call appealed to their sense of adventure and offered an escape from the humdrum life of office, factory and mill.

The new recruits volunteered with brothers, cousins, friends and work mates. The newly-formed units became the focus of local civic pride and soon became known as the Pals. The City of Birmingham formed three such battalions with over 3,000 local volunteers. This book tells their story.

Birmingham Pals is a story that covers the full range of human experience in war - the highest courage and bravery, the misery and tedium of trench life, the exhilaration, terror and slaughter involved in ‘going over the top’. Above all, it is a story of interest to people of all backgrounds and ages, as a tale of comradeship, which, for many survivors, was to last a life time.