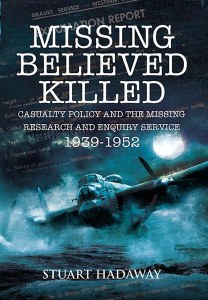 During the early years of World War Two it soon became apparent that the system for tracing the whereabouts of the remains of RAF aircrew deemed 'Missing Believed Killed' was totally inadequate. The Missing Research Section (MRS) of the Air Ministry was set up in late 1941 to deal with this increasing problem. It collected and collated intelligence reports from a wide variety of official, unofficial and covert sources in an attempt to establish the fate of missing aircrew.

Increasingly this included forensic or semi-forensic work to identify personal effects passed on through clandestine channels or bodies washed up on Britain's shores.In December 1944 the MRS was expanded and a small team of fourteen men, named the Missing Research and Enquiry Service (MRES), was sent to France to seek the missing men on the ground. With 42,000 men missing, the amount that fourteen men could achieve was naturally limited, so in July and August 1945 a series of meetings at the Air Ministry decided on the rapid expansion of the MRES to over twenty-five times its current size, split between six units with set geographical areas of responsibility. This book explains why, in their own words, men volunteered for the job, and why they worked for so long at such a gruesome task.

Each faced difficulties in terrain and climate, all the way from the Arctic Circle to the jungles of Burma. Local populations, essential to much of the MRES's work, ranged from the immensely friendly to the openly hostile; teams had to operate in Germany, only recently razed from end to end by the aircrews they were seeking and then also behind an ever solidifying Iron Curtain. The final chapters explain how to trace RAF members through both personnel and operational records, show where these records are kept and explain how to access them.