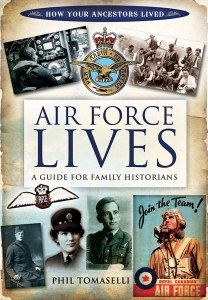 What was it like to serve as an airman in the Second World War, as a pilot, a bomb aimer, or aerial gunner, or as a trainee pilot in 1913, a Zeppelin chaser during the First World War, or serve as a Wren fitter in the Fleet Air Arm or as a member of the ground crew who are so often overlooked in the history of Britain’s air arm? And how can you find out about an individual, an ancestor whose service career is a gap in your family’s history?

In this readable and instructive book Phil Thomaselli shows you how this can be done. He describes in fascinating detail the careers of a group air force personnel from all branches and levels of the service. Using evidence gleaned from a range of sources archives, memoirs, official records, books, libraries, oral history and the internet he reconstructs the records of a revealing and representative group of ordinary men and women: among them an RFC fitter who won the Military Medal on the Somme, an RAF pilot who flew in Russia in 1919, an air gunner from the Second Word War, a Pathfinder crew who flew 77 missions, a Battle of Britain pilot and a typical WAAF.

In each case he shows how the research was conducted and explains how the lives of such individuals can be explored.