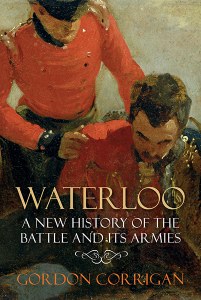 Waterloo : A New History of the Battle and its Armies

"Fought on Sunday, 18 June 1815, by some 220,000 men over rain-sodden ground in what is now Belgium, the Battle of Waterloo brought an end to twenty-three years of almost continual war between revolutionary and later imperial France and her enemies. A decisive defeat for Napoleon and a hard-won victory for the Allied armies of the Duke of Wellington and the Prussians led by the stalwart Blucher, it brought about the French emperor's final exile to St Helena and cleared the way for Britain to become the dominant world power. A former soldier, Gordon Corrigan is the author of an acclaimed military biography of Wellington and has walked the battlefields of the Napoleonic era many times.

He is perfectly placed to offer a robust, clear and gripping account of the campaign that surveys the wider military scene before moving on to the actions at Quatre Bras and Ligny and then the final, set-piece confrontation at Waterloo itself. He is also well qualified to explore, often in fascinating detail, the relative strengths and frailties of the very different armies involved - French, British, Dutch, Prussian and German - of their various arms - infantry, artillery and cavalry - and of their men, officers and, above all, their commanders. Wellington remarked that Waterloo was 'a damned nice thing', 'nice' meaning uncertain or finely balanced.

He was right. For his part, Napoleon reckoned 'the English are bad troops and this affair is nothing more than eating breakfast'. He was wrong, and this splendid book proves just how wrong."