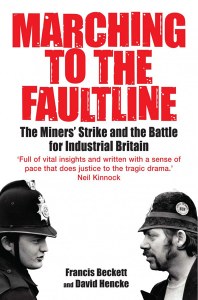 Marching To The Faultline

Marching To The Faultline : The Miners' Strike and the Battle for Industrial Britain

This is a controversial new investigation in the 1984 Miners strike and how it changed Modern Britain. The Miners' strike was a dividing line in Modern British history. Before 1984, Britain was an industrial nation, reborn from the ashes of the Second World War by Clement Atlee's vision of a welfare state.

Most of the great industries were nationalized and the trade unions was one of the major forces in the land. After the strike, which ended with humiliating defeat in March 1985, Thatcher's Britain was born. In March 1984, the leader of the Miners' Union, Arthur Scargill, led his members out of the pits without a ballot to protest at planned pit closures; they would spend the next 13 months facing the utmost deprivations as they fought to keep their jobs.

On picket lines the miners faced harassment and the police, which culminated in the violent Battle of Orgreave. Meanwhile Thatcher's government feared that Britain was on the verge of a civil war. It was a struggle of attrition that neither side could dare lose.

Twenty five years after the strike, the debate is still controversial. "Marching to the Faultline" tells the full story of the strike from confidential cabinet meetings at Downing Street to back room negotiations, and life on the picket line. The book draws on previously unseen sources from interviews with the major figures, private archives and documents obtained under the Freedom of Information Act to set the record straight.

From A Rock To A Hard Place