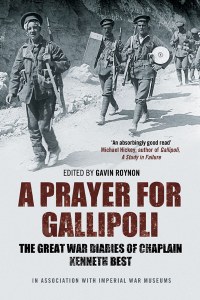 A Prayer for Gallipoli

Many chaplains were not permitted to go near the Front in the First World War - others insisted on doing so, like Kenneth Best in the Gallipoli Campaign. Best had no military training before the war but he felt that he could only fulfil his pastoral role by getting close to the front line and working with the troops under fire. Best was attached to the 42nd East Lancastrians - the first Territorial Army Division to serve overseas in the conflict, so arguably the least experienced in the ways of war.

In his diary we follow his progress through his initial training in Egypt and on to his arrival in Gallipoli in May 1915. Gallipoli has become notorious, even by the standards of the First World War. After a naval campaign to open up a supply route to Russia through Turkey failed, some 480,000 Allied troops were drawn into a land invasion in which hundreds of thousands were injured or killed.

In his diary, Best records his efforts to encourage frightened men before they go over the top, to comfort the wounded and, when the fighting stops, to bury the dead. His empathy for the troops is matched by a forthright disgust for their leaders, few of whom share his insight into the horrific realities of trench warfare.