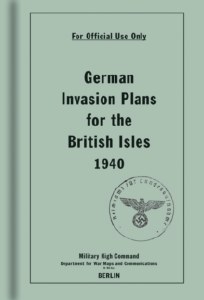 I have decided to prepare a landing operation against England, and if necessary to carry it. - Adolf Hitler, 16 July 1940. Immediately after the fall of France in June 1940, Hitler ordered his generals to organize the invasion of Britain under a plan codenamed Operation Sealion.

The objective was to land 160,000 German soldiers along a forty-mile coastal stretch of south-east England. Prior to the invasion, a complex set of documents had been drawn up, consisting of maps, aerial photographs, a physical description of the British Isles - region by region, statistics about roads, lists of strategic targets, and a short phrase book for the invading forces when it became necessary to fraternize with the local populace. This book brings together a selection of these documents and reproduces them in a handy-sized format.

It includes aerial photographs of strategic sites, maps of the main urban centres (with identified targets), a detailed listing of British roads, advice for officers about how to mount an attack on each county, a brief description of the social composition of Britain, and a dictionary and phrase book. It also includes an introduction setting the material in its historical and military context. These invasion plans survive in very few numbers.