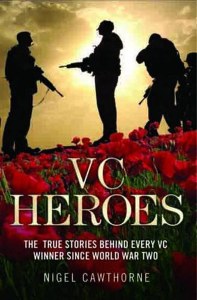 VC Heroes : The True Stories Behind Every VC Winner Since WW2

For a nation with a long and proud-military tradition, one token stands above all others as a mark of recognition for the ultimate individual feats of arms: the Victoria Cross. Awarded for one reason alone - to mark extreme acts of great heroism by British and Commonwealth servicemen in the face of the enemy - it is unquestionably the hardest club in the world to gain entrance to. Its holders - ordinary soldiers, sailors and airmen - are linked by an uncommon bond of exceptional bravery, displayed often at great personal risk and against impossible odds.

The VC has been awarded only sixteen times since the end of the Second World War in 1945. Three of these awards were made to recipients who had paid the ultimate sacrifice while demonstrating gallantry beyond the call of duty.