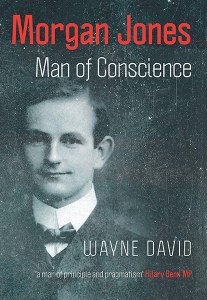 Imprisoned in Wormwood Scrubs for his pacifist beliefs during the First World War, Morgan Jones made history by becoming the first conscientious objector to be elected an MP when he won the Caerphilly by-election for Labour in 1921.

In Morgan Jones - Man of Conscience, the first biography of this remarkable politician, Wayne David explains how Jones became a pioneering education minister in the 1924 and 1929-31 Labour Governments - being amongst the first to articulate the need for free, 'comprehensive' secondary education for all - and how he was a tireless campaigner against injustice, supporting many causes at home and abroad from Welsh devolution to the establishment of a Jewish homeland.

Published on the 80th anniversary of his death in 1939, aged only 53, Wayne David's Morgan Jones - Man of Conscience for the first time reveals the full story of Jones' political journey from Rhymney Valley radical to parliamentary pragmatist who, after witnessing the rise of fascism in Europe and the horrors of the Spanish Civil War, finally rejected pacifism in favour of military action to defend democracy from the evils of Nazism.