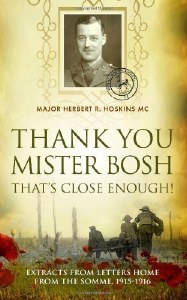 A collection of detailed personal letters by a soldier serving in the First World War collated into one of the most complete visions of life in the trenches.

In 1914 Herbert Hoskins joined the British Army and soon found himself as a Major serving in the muddy, disease ridden trenches of the Somme in war-torn France. Carefully collected by his grandson, Major Hoskins’ letters are printed alongside startling images and illustrations to provide a fascinating picture of the horrific world these soldiers inhabited. The letters show the extraordinary courage and stoicism by serving soldiers as they faced illness, weather and an indefatigable enemy through years of non-stop conflict. Major Hoskins letters record not only the unimaginable hardship endured every day, but also the good spirit and optimism that helped him survive.

Full of tragedy and peril but also laughter and triumph, Thank You Mister Bosh, That’s Close Enough! is an eye-opening collection of Major Hoskins’ personal letters in one of the most complete visions of life in the trenches.