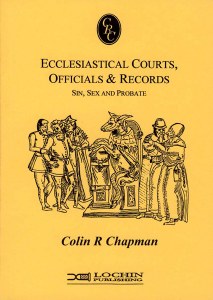 An easy-to-understand explanation of the complex organisation and procedures of Church Courts and their officials. Ecclesiastical Courts granted probate (Wills and Letters of Administration), issued common and special marriage licences and honorary degrees; following Visitations these courts heard cases of, and passed judgement on, sexual misconduct of parishioners and priests, abuse and de-famation of neighbours and the appointment and discipline of the clergy. The depositions (statements) of witnesses were recorded in graphic detail, mostly in English, causing these courts to be termed the "Bawdy Courts" in the 18th Century. These much under-used sources for family history are also excellent for migration studies. Diocesan maps and the present location of the records provided in this indexed book will encourage researchers to make greater use of the material.