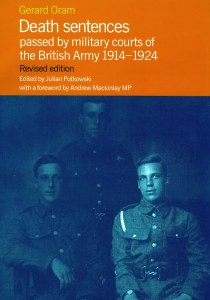 This book makes available information relating to more than 3,000 soldiers and civilians sentenced to death by military courts of the British Army during the First World War and its aftermath. Details of these individuals are presented in two lists one chronological according to the date of sentencing, the other alphabetical together with Public Record Office numbers. Gerard Oram’s introduction succinctly explains the guidelines he has followed in compiling the information contained here.

Gerard Oram is a social and cultural historian whose main interests are ideas and beliefs of the nineteenth and twentieth centuries. He is a lecturer in Modern European History at the Open University and the author of Worthless Menrace, eugenics and tthe death penalty in the British army during the First World War.