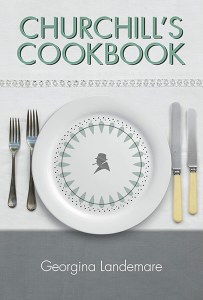 It is well to remember that the stomach governs the world. Winston Churchill Mrs. Landemare s food is distinguished.

At the outbreak of the Second World War, however, she devoted her full-time services to the Churchill family, declaring This will be my war work! She worked for the prime minster throughout the war; she was up at dawn preparing his breakfast and remained steadfastly in the kitchen until after his last whiskey at night. On VE Night, Churchill told her that he could not have managed through the war without her. With an introduction by Phil Reed, director of the Churchill War Rooms, "Churchill s Cookbook" marks the fiftieth anniversary of Churchill s death and the seventieth anniversary of VE Day.

Covering mouth-watering cakes, biscuits, and puddings; healthy salads; and warming soups; this timely publication revives some forgotten British classics and reveals the food that sustained Churchill during his finest hours."

Victory In The Kitchen