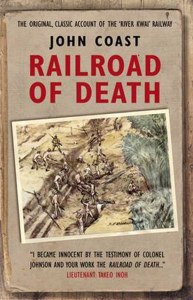 Railroad of Death : The Original Classic Account of the "River Kwai" Railway

A bestseller in 1946, Railroad of Death is the first and best account of forced labour on the Burma Railway. John Coast was a young officer in the Norfolk Regiment who was taken prisoner at the Fall of Singapore in February 1942. He took notes and concealed them from the Japanese for nearly three years, but he lost the lot when he was forced to bury them in Chungkai Camp to avoid repeated searches.

Coast had to write the book all over again while on the voyage home. His book is moving, dramatic and chilling in the detail it gives of the cruelty inflicted by Japanese and Korean soldiers on the prisoners and Asian workers who died in even greater numbers working on the railway. Yet it is at the same time lyrical in its descriptions of the natural world surrounding the camps and the food and kindness shown by some Thais to the prisoners.

Coast brings to life the camps and towns of the Burma Railway and the culture of Bali and Indonesia that so entranced Coast, allowing him to find some comfort and meaning amid the horror. This new edition has an introduction and appendices which takes Coast's legacy of dealing with his experiences in the camps forward through to his groundbreaking 1969 BBC programme Return to the River Kwai and beyond and includes transcriptions of his BBC interviews with his Japanese captors and Takashi Nagase. Nagase's appearance, decades before his meeting with Eric Lomax, author of The Railway Man, is revelatory when he and the other Japanese are asked to comment on evidence of Japanese treatment of POWs on the Railway.

Other appendices include never before published documents which help reveal details about secret radios and attempted escapes masterminded by the talented group of officers around Coast. The new edition includes an index and list of newly identified individuals mentioned in the book including the famous Lieutenant Colonel Toosey.