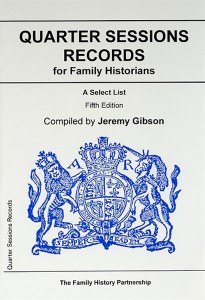 Quarter Sessions records are potentially the most useful source for filling in the background in family history research. In addition to the Sessions’ role as judicial authority in cases of minor crime (which continued until 1972), they were the administrative body of each county before the establishment of county councils. Dating from medieval times, their records often extend back to Tudor times (or even earlier).

Although not intended as a genealogical source, records of settlement and, occasionally, apprenticeship may provide such direct evidence. More relevant is the ‘lucky dip’ which may mention family members as magistrates, offenders or witnesses, holders of minor administrative office and a host of other occupations. Categories of likely use are listed on the inside cover.

Other Gibson Guides list in detail some of these: Coroners’ Records; Electoral Registers; The Hearth Tax; Land and Window Tax Assessments; Militia Lists; Poll Books; and Victuallers’ Licences. There are many, many more to provide rich pickings for the researcher, as described in Richard Ratcliffe’s recent Basic Facts about Quarter Session Records.

Much depends on the current organisation of the records, their condition, cataloguing and indexing. This Guide will tell you just what is there, what is reasonably accessible, and so on, in the usual style of a Gibson Guide.

Quarter Sessions Records, first published in 1982, has been a valuable part of the series and this new edition, the first for twelve years, and now incorporating internet website and email information, will be widely welcomed.