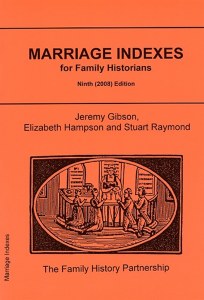 All family historians will know that the most elusive vital facts in their research are the marriages of their ancestors. This comes down to the simple matter that it has always been normal for the wedding to take place in the bride’s parish, but thereafter, of course, they live in that of the groom.

Genealogists have always recognised this problem, and a century ago Percival Boyd was probably the earliest to attempt a wide-ranging series of marriage indexes. Most of these were confined to individual counties, though he also initiated a miscellaneous index transcending county boundaries.

Since the advent of family history societies, marriage indexes have proliferated, and exist in some form for most if not all counties, at least in England and Wales.

The need for family historians to be aware of what marriage indexes are available has long been recognised in the Gibson Guides series, with the first appearing almost 20 years ago. There have been many editions since, some including Census Indexes and Specialist Indexes. Such is the growth of these finding aids that this new edition, the first for seven years, is once again confined just to Marriage Indexes (a new edition of Specialist Indexes will be published shortly). For the first time internet websites and email addresses are featured prominently.

The Legitimacy of Bastards