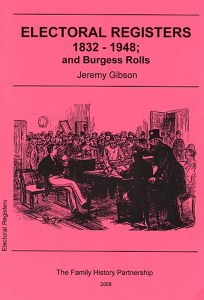 The listing is now arranged, under county, by constituency, showing the boundary and name changes of 1885 and 1918, and concluding before those of 1948. This has cleared ambiguities in the earlier Guide. Of major importance is the inclusion of the vast British Library collection, previously omitted, and much expanded coverage of that of the National Library of Wales. Record Offices were circulated and extensive searches by archivists have clarified and extended details of holdings countrywide.

Whilst since 1948 the British Library has a complete collection of these Registers for Great Britain and Northern Ireland, for earlier periods, particularly before 1914, survival in much less comprehensive. This Guide brings together as far as possible information on all holdings of Registers, in contrast to the excellent British Library Guide to Parliamentary Constituencies (1998, new edition in preparation) and catalogues for other record offices and libraries, which are all confined just to their own collections.

With parliamentary reform of 1832, official Electoral Registers came into being. These were annual lists of names and addresses of those with the (property) right to vote, extended periodically to end with the universal adult suffrage we know today.

Also included are Burgess Rolls of voters in Borough elections, often preceding 1832 and continuing into the twentieth century; and any similar-seeming lists.

The Butcher, The Baker, The Candlestick Maker

Making Sense of the Census Revisited

Tracing Your Ancestors Using The Census