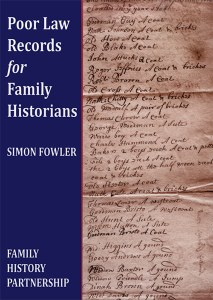 The Old Poor Law 1601-1834 includes the records of the Parish Overseers of the Poor who were concerned not only with relieving the poor but with matters of settlement, removal, vagrancy, bastardy and apprenticeship.

The New Poor Law 1834-1948 includes the records of the Poor Law Unions with their dreaded Workhouses before the introduction of Old Age Pensions and the Welfare State in the Twentieth Century.

In this book, Simon Fowler describes many of the Poor Law records that may survive and where to find them as well as those of other organisations who helped to relieve families in desperate need.