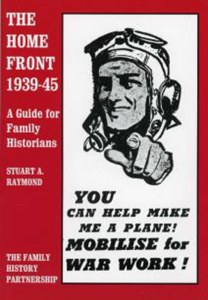 The Home Front played a significant role in the Second World War. Millions volunteered to serve part-time in the Home Guard and civil defence. Organizations such as the Red Cross, the Women's Voluntary Service, and the Women's Institute, depended on volunteers to run the services they provided. The Bevin Boys were conscripted to dig for coal, rather than to serve in the armed forces. Many especially women worked in munitions factories. Other girls just out of school found their role in the Women's Land Army. The police and fire services were needed even more in time of war. In rural areas, many householders took in evacuees. Just about everybody in war-time Britain had their role to play in the prosecution of the war.

All of this activity created a huge mass of paper, which archivists are only now coming to grips with. It provides us with the means of finding out what our ancestors did on the Home Front. This book will guide you through the wide variety of sources available; it will tell you what to look for and where to find it. If you want to discover what your ancestor did in the war, then read this book!