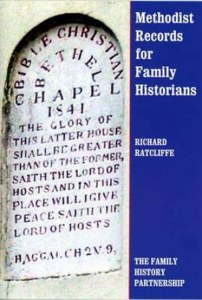 Includes information on the Methodist Movement and its organisation alongside details of methodist archives and records availabel to the family historian.

This booklet is an expanded version of an earlier publication by Ratcliffe that is no longer available. The author is a Methodist layman, who in retirement from teaching, has worked as a part-time archivist and continues to be fully involved in family history. The layout of the contents is logical - brief historical overview and guide to how Methodism in the UK works, followed by archive guides at national, regional and local levels. It is particularly helpful to those who will be researching Methodist ancestors but who have no prior experience of the movement as it differentiates between the types of record likely to be found and the possibilities of finding them in different sorts of archive. Each section follows the same format - the source in bold type followed by 2 or 3 lines describing the information to be found therein. Some entries are longer and contain examples of the document featured, such as from the baptismal and obituary records. Links to relevant major databases online are provided to some of the records mentioned. This book should certainly be on the shelves at city and county archives and main libraries as it is a step forward in having so much information about Methodist records in one place. However, given its very reasonable price and compact size, it is also a worthwhile personal purchase for anyone who has discovered they may have Methodist ancestors, especially when used in conjunction with the more recently set up Methodist Heritage websites to which the book refers. Heather Noel-Smith The Friends of The National Archives http://nationalarchives.gov.uk/get-involved/friends.htm