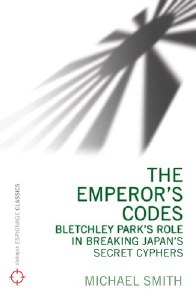 Without the extraordinary exploits of Allied codebreakers, the outcome of World War II might have been very different. Much is known about the breaking of the Nazis’ "unbreakable" Enigma cipher by the codebreakers based at Britain’s Bletchley Park, which is believed to have shortened the war in Europe by as much as two years. Less well documented is the fact that the Allied codebreakers were also working furiously to crack the codes and ciphers of all Germany’s allies in Europe and elsewhere the most important by far being Japan.

In The Emperor’s Codes, Michael Smith fully examines for the first time how Japan’s codes were broken and the differing personalities and nationalities among the often eccentric codebreakers. He details the hard work and almost unfathomable dedication demonstrated by those relatively unsung heroes who contributed immeasurably to the Allies’ eventual victory. He also takes the reader step-by-step through the codebreaking process, explaining exactly how the codebreakers went about their daunting task made even more difficult by the vast linguistic differences between Japanese and English.