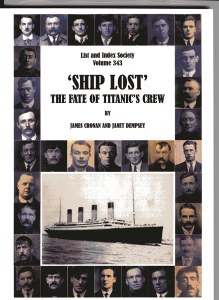 Ship Lost : The Fate of the Titanic Crew

Titanic continues to capture the popular imagination even a hundred
years after her tragic loss in the North Atlantic in 1912. However much of
that focus is on the disparity between the survival rates of the first and third
class passengers and the loss of the rich and famous on board. Often
overlooked are the crew of the Titanic of whom four out of five lost their
lives in the disaster.

James Cronan and Janet Dempsey have used the original Titanic crew records held at the National Archives to attempt to redress this balance, not only looking at the crew who lost their lives but
also following the fate of those who survived and in many cases actually
carried on a career at sea.

This definitive reference work includes a listing of all Titanic’s crew, recording those who were lost and saved; a gallery of unique previously unseen photographs of Titanic crew survivors; five in depth case studies including Captain E.J.Smith, Violet Jessop and Frederick Woodford; an in
depth analysis of the crew list and guidance on how to undertake research
with regards to Merchant Navy officers and seamen in the early twentieth century.

For the Centenary of Titanic's loss the National Archives at Kew (TNA) undertook a series of releases, from a new website to a special conference, both of which I was privileged to assist with. Archive experts James Cronan, descendant of victim Frederick Woodford, and Janet Dempsey further produced this publication on each member of Titanic's crew, based on the material housed in the Archive. Opening with an overview of mariner records and what they contain (as much for general genealogical research as Titanic-based), five case studies are presented - Charles Joughin, Violet Jessop, Samuel Ernest Hemming, Frederick Woodford and Captain Smith. Each consists of a brief biography and images of various original documents pertaining to them. This is followed by a section recounting reports of the aftermath in Southampton, being central to the vast majority of crew, and photographs of several crewmembers taken from CR10 mariner index cards. While the above may seem brief, and there are other publications which cover them, this is not the central purpose of the book, only occupying the first 24 pages. Thereafter, tables have been collated of name, age, address, previous ship, date, position, certificate number and monthly wage for every single person employed aboard. Divided by department (deck, restaurant etc), they reveal fascinating details, such as those transferred from Olympic or for whom Titanic was their first ship. Did you know that as far as the Board of Trade was concerned, Smith's 'previous ship' was Titanic herself? But the research goes much further. Thereafter all those lost are collated along with TNA references for their previous ships and additional notes (1911 census, where buried etc). Yet even more impressively, not only are the surviving crewmembers collated as above but also included are their lifeboat number, Enquiry evidence numbers, wartime medal rolls, later career TNA references and details of every subsequent vessel worked on. This includes those who acted as nurses on hospital ships. Finally, details of absentee crew who never sailed, and the reasons, are given along with a detailed index of names. Contrary to previous TNA publications of reproduction documents, this book is the result of research across a wide range of sources. While for the most part not a book to 'sit down and read', unlike most other books it fills a gap by presenting this significant data in a readily-accessible format and aiding further research with its detailed cross-referencing. For anyone interested in Titanic's crew, be it generally, specifically or genealogically, this is a valuable reference tool. Rudi Newman Secretary British Titanic Society

Voyages From The Past