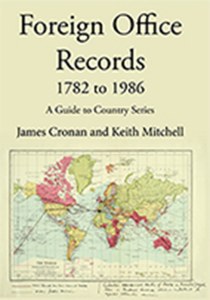 The records of the Foreign Office provide a wealth of information on British relations with foreign states from 1782 to the present day. For over 200 years the Department was responsible for correspondence and negotiations with other states and the conduct of British foreign policy. They dealt with matters such as the slave trade, international boundary disputes, and commercial, royal and peace treaties, as well as the diplomatic relations with foreign nations. The records also provide insights into the history of domestic issues in countries around the world, such as fishing disputes, political events, and local trade and business concerns. This publication aims to give an understanding on how British foreign policy was adopted and undertaken. The list by country of the records of the Foreign Office, Dominions Office and from 1966 the Foreign and Commonwealth Office will help to identify the relevant series for research.