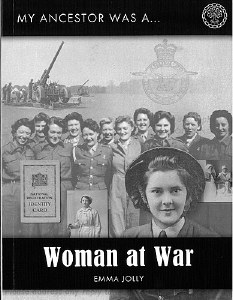 This book aims to explore the wide range of roles undertaken by women during wartime. A useful aid in tracing a female ancestors military career, the book also considers wider research into the role of women at war, with a particular emphasis on the Victorian era and the First and Second World Wars. The book includes case studies, and guides to available records and sources.

One of about 25 titles in the Society of Genealogist's "My ancestor was a…" series, this maintains the excellent standard of the series in a packed 309 pages. The challenge is to produce a readable, even entertaining, volume which yet contains a huge amount of rather dry reference material. Emma Jolly has managed to keep a good balance, using illustrated case histories with photographs and other records. Inevitably there was some reliance on group photos too small and lacking in contrast to pick out any detail, and one rather felt that if reproducing an ARP enrolment form it might as well be large enough to decipher. Fewer but larger and clearer illustrations may be the way to go. A bit of modern electronic magic might have done wonders for the rather grey appearance of the book, even if colour was not an option. The fifteen chapters introduce the topic for the general reader, explaining how the presence of women in war situations developed over time from the camp followers (laundrywomen, caterers, nurses, prostitutes) of the Civil War to the schoolmistresses and nurses attached to Victorian armies, and the multiplicity of roles of all kinds, many non-military, in the 20th century. In each chapter a few individuals are picked out to tell an illuminating story, and everywhere one comes across a quirky new detail. For instance, in the Georgian army only six women were allowed for every 100 men - at least, in theory. During WW1, MI5 recruited boy scouts as messengers but found them 'too troublesome' and replaced them with Girl Guides, who were much more satisfactory. Also in WW1 there was a military massage service - who knew? Between the wars and even during WW2, female doctors were consistently made unwelcome by the RAMC. But they were not the only undervalued contributors to the war effort - those who served in the Women's Land Army did not receive a service badge until 2007, although many had been called up as much as any soldier. Each chapter concludes with a "How to find out" section and the book is full of useful lists; the different types of munitions factory, umpteen nursing bodies both volunteer and official paid, five private organisations volunteering for agricultural work, the roles and ranks of the ATS both before and after reorganisation. There are separate chapters on WAAFs and WRNS, on spies (SOE) and intelligence (Bletchley Park), and the women of the Empire and Commonwealth. The final third of the book is dense with information for the researcher, bibliographies for each chapter, a chronology, lists of recipients of the George Cross and of those memorialised in the windows of York Minster, and an invaluable list of acronyms. Here you can identify NACB, QARNNS, SAMNS and PMRAFNS, all labels once proudly worn by serving women. Finally come the indexes of personal names, shops, military hospitals, explosives factories, and wartime organisations. The reach is wide and should cover the majority of women who did anything to aid the war effort - even the Women's Institute was a department of the Ministry of Agriculture during WWI. The one thing I could not find anything about were the creches which were organised at a national level so that women could go to work and which were dropped like a stone as soon as possible after the men started coming back. It seems that the women who worked in them didn't have an acronym to call their own. Hilary Potts Friends of The National Archives. http://nationalarchives.gov.uk/get-involved/friends.htm