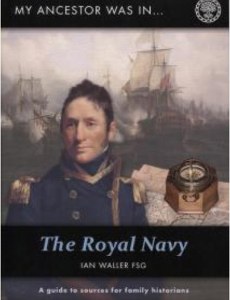 This long awaited addition to the series will become the bible for tracing Royal Naval ancestors. A comprehensive guide to Navy records dating back to before 1700, the book also contains a brief history of the service, guides to uniforms and insignia, divisions and branches of the Navy, pensions, dockyards, casualties, courts martial and tribunals and much, much more. Illustrated in full colour throughout.

This book, one of the well-known series of the Society of Genealogists' guides to specific record sources for family historians, has the remit of introducing the types, scope and accessibility of relevant records and explaining how they may be used and what the researcher can expect to find. This volume succeeds in this, as it manages to survey the vast range of surviving records for the Royal Navy and make them less daunting for someone who may be just starting out on researching a naval ancestor, whether for a 20th century grandparent or for a more distant ancestor in the Napoleonic era or much earlier. Chapters break down the records in a way that means a reader may go to ones they know to be relevant to their particular era. Within each chapter the available records are briefly described and their class number/shelf mark given. There is extensive coverage of the vast ADM archive at TNA, but also notes on other important sources such as the Caird Library at Greenwich and the NMRN at Portsmouth and smaller archives. Dates of coverage are given and also suggestions for areas of research which are problematic. Experienced researchers will also find the book helpful as it can be combined with finding aids to help open up less obvious avenues of research. As well as naval personnel records, chapters include related groups, such as dockyard workers and the coast guard service. An example of the author's ability to make potentially complex research accessible is the chapter on the ADM12 Indexes and Digest which is helpfully written. There is a list of useful websites and online archives and a small general bibliography. This is an essential book for anyone interested in knowing as much about a naval ancestor as possible. Heather Noel-Smith Friends of The National Archives. http://nationalarchives.gov.uk/get-involved/friends.htm