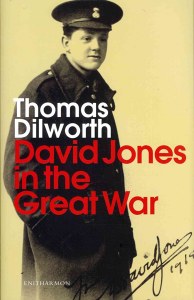 David Jones. A London boy who went to art school, then to war; a soldier who endured years of artillery fire and was wounded at the Somme; an artist and writer who went on to redefine modernism. Now, thanks to Thomas Dilworth's extensive research, the story can be told in detail.

David Jones in the Great War vividly presents life on the front line, challenging the accepted wisdom about Jones's service and illuminating the man and his work. Accompanying the text are photos of Jones and wartime sketches and writing, for the best part previously unpublished, and seven fully rendered drawings not seen since the war. These provide major new links between his apprenticeship and his later work.

Thomas Dilworth is the pre-eminent scholar on David Jones and his work. His The Shape and Meaning in the Work of David Jones (1988) and the prose rendering of Jones's often cryptic poetry Reading David Jones (2008) are key reference texts. David Jones in the Great War completes the trilogy with a portrait of the artist as a young man.