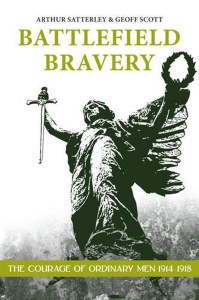 The first analysis of bravery medals for each Army unit in WW1, including analysis of battlefield psychology and remembrance.

This is a book about humanity. It is about lifesaving and that incredibly deep concern for mates that developed on the Western Front between 1914 and 1918. Far from being entirely murderous, the desolation of the Great War is punctuated by the light of personal efforts to help others. The ways in which this arose are fascinating, and help to square up the contradictory viewpoints that the Great War was nothing but horror and yet was a time of enormous comradeship and unity of purpose.
It is also about our grandparents and great grandparents, those very ordinary people who went with some willingness to fight the war to end all wars. How they did that and what they experienced when they got there is dealt with by looking at the bravery medals they won, the stress they endured and the ways in which remembrance was born.

Whereas previous books deal with medals and awards in a standalone fashion, they largely fail to address the honours system as a complete phenomenon and deal inadequately with what heroism is, how it comes about and how it relates to remembrance.

This unique book also provides an index of gallantry for each Army Corps in turn.