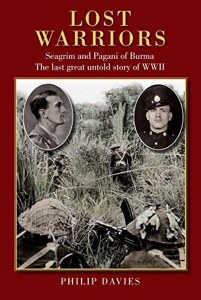 Lost Warriors of the Forgotten War tells the sensational, but little-known, story of Major Hugh Seagrim GC, DSO, MBE, who volunteered to stay behind the Japanese lines for over two and a half years to raise an army amongst the loyal Karens of eastern Burma in the most successful guerrilla operation of the Second World War.

The last great untold story of WWII tells of courage and conflict in the jungle of Burma during the Japanese occupation. An intensely human story of honour, courage, love and self-sacrifice in the face of appalling brutality. Its legacy resonates to this day as the diverse peoples of Burma search for lasting solutions to their conflicts.