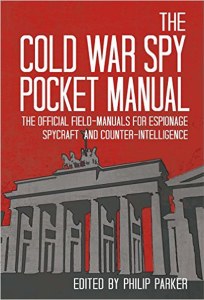 Some twenty-five years after its conclusion, yet with its echoes resonating once more in contemporary East-West relations, the rigors and detail of many aspects of the Cold War are becoming increasingly of interest. Furthermore, at the very same time many of the records of the period are beginning to become accessible for the first time. At the forefront of this unique conflict, that divided the world into two opposing camps for over four decades, were the security services and the agents of these secretive organizations. The Cold War Pocket Manual presents a meticulously compiled selection of recently unclassified documents, field-manuals, briefing directives and intelligence primers that uncover the training and techniques required to function as a spy in the darkest periods of modern history. Material has been researched from the CIA, MI5 and MI6, the KGB, the STASI as well as from the Middle East security services and on into China and the East. As insightful as any drama these documents detail, amongst many other things, the directives that informed nuclear espionage, assassinations, interrogations and the turning of agents and impacted upon the Suez Crisis, the Hungarian Uprising, the Cambridge Five and the most tellingly the Cuban Missile Crisis in 1962. Full introduction and commentary provided by leading historian and former diplomat Philip Parker. Complete with a catalogue of, and often instructions for, genuine espionage devices including lock decoders, bugging equipment, a 4.5mm single-shot lipstick gun, microfilm concealing coins and cameras mounted in clothing or pens and shoe-concealed tracking devices. Presents for the first time the insightful documents, many of which inspired Cold War novelists including John Le Carré, Len Deighton and Ian Fleming, and many of which they would never have seen.