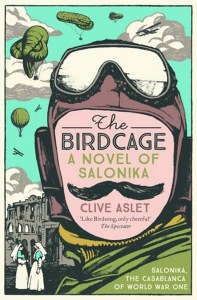 Birdcage : A Novel of Salonika

Salonika in 1916 is a city more than half-Jewish and, until a few months ago, one of the jewels in the Ottoman crown. It is now suddenly Greek. Nominally neutral, it is filled with French, British and Serbian soldiers defending it against the Austro-German and Bulgarian forces to the north.

In a city seething with intrigue, cafe society continues unperturbed and the native inhabitants make from the soldiers what money they can. Young nurses from the Women's Hospital join seasoned soldiers, and Kite Balloonists must trade their traditional chivalry towards the enemy against the need to survive. In this sparkling tale, the spirits of Wodehouse and Waugh meet those of Biggles and R C Sherriff, and the sense of time and place is impeccably vivid and real.

On Call In Africa