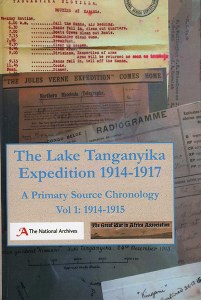 Mention the Lake Tanganyika Expedition of the First World War and invariably you'll receive 'Ah, Mimi and Toutou' or something along the line of 'that's the force that had the strange/weird captain who dressed in a skirt which dragged boats across Africa to defeat the Germans.' Both are right, but there's far more to the story than is generally known and which is colourfully depicted in Giles Foden's Mimi and Toutou go forth: The bizarre battle for Lake Tanganyika.
The Primary Source Chronology has brought together all the known English primary sources including translations of the German headquarter diaries, and some Belgian sources, in two volumes. The fully referenced material has been recorded in chronological order with correspondence split between that originating in Europe alongside that in Africa allowing the researcher an insight into how information was transmitted and the resultant impact on decision-making. In addition, there is an accompanying diary of events in both Europe and Africa to help place the expedition in a wider context. Volume three contains the index, according to date rather than page, translations of the French and biographical details of those involved. The books also contain a full bibliography of known articles, books and visual media of the expedition to date.
The chronology shouldn't detract from those wanting to do their own research (there is nothing like seeing the documents for yourself and verifying the contents) but it will be of great help to those who cannot access the archives and private collections who want to know the full story, write their own novels or narratives, etc, etc, etc.
Volume two is expected out in August and Volume three in December 2016.