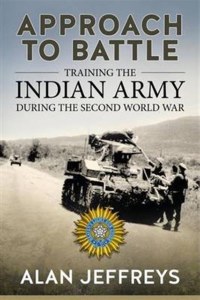 Approach to Battle : Training the Indian Army During the Second World War

Finally, it will show that the Indian Army was reorganised after experiences of the First World War. During the interwar period, the army developed training and belief for both fighting on the North West Frontier, and as an aid to civil power. With the outbreak of the Second World War, in addition to these roles, the army had to expand and adapt to fighting modern professional armies in the difficult terrains of desert, jungle and mountain warfare.

A clear development of doctrine and training can be seen, with many pamphlets being produced by GHQ India that were, in turn, used to formulate training within formations and then used in divisional, brigade and unit training instructions - thus a clear line of process can be seen not only from GHQ India down to brigade and battalion level, but also upwards from battalion and brigade level based on experience in battle that was absorbed into new training instructions. Together with the added impetus for education in the army, by 1945 the Indian Army had become a modern, professional and national army.